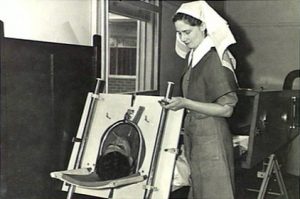 In retrospect, I realize that when I entered Columbia University College of Physicians and Surgeons, the practice of medicine sat at the cusp of the ancient traditions and explosive technological changes.  Our traditional curriculum began with two rigorous years in the classroom before we were allowed to take a medical history or perform a physical examination on a live patient.  We learned the fine points of physical examination, because there were no CAT scans, tumor markers, or echocardiograms.

Of course, we had insulin to treat diabetes, penicillin and erythromycin for gram-positive, and streptomycin for gram-negative infections.  Methicillin and kanamycin just became available for newly resistant microorganisms. Merck-Sharp and Dohme and Eli Lilly were the two major antibiotic pharmaceutical houses, because that was where the profits were.  The drug companies had not yet figured out that the way to make the most money was to create drugs that patients would need to take every day for a lifetime. Medications that would lower cholesterol, prevent ulcers and heartburn, ameliorate anxiety and depression, and safely lower high blood pressure would later replace antibiotics as the cash cows of the industry.  Big Pharma would then abandon antibiotic research.

A new treatment for kidney failure, peritoneal dialysis, was just beginning to be used in some centers, but not yet at Columbia-Presbyterian Hospital.  Ventilators were available in some circumstances, but we still used “iron lungs” (relics from the days of paralytic polio epidemics which, thankfully, disappeared after the vaccine) for patients with COPD.  I remember how terrified my patient was when we put him in the iron lung so he could “rest.” He was forced to lie flat on his back, only his head sticking out of the machine that looked more like a metal casket than a vacuum chamber with bellows that moved his abdomen and chest so air flowed in and out of his destroyed lungs. Lying flat on your back would be the last position anyone struggling to breathe would choose. His pupils were dilated from panic as he desperately fought to sit up.  We used what we had to calm him, but we had none of the commonly used sedatives that would become available over the next two decades.

Presbyterian Hospital still had 12-bed wards for local neighborhood patients, as well as a separate pavilion with single rooms for their wealthier clientele, some who travelled great distances to see renowned specialists. Medical students drew the blood on the ward patients, and performed white blood counts and urinalyses in a small laboratory just off the ward before making rounds with the residents and the attending professor.  We also learned to insert intravenous lines on the ward patients.  I chose comatose patients to hone my skills. In the beginning, I might have to stick patents with poor veins four or five times.  Within a decade, technicians in the central lab set up automated lab tests, while other dedicated personnel drew the patients’ blood and started their IVs.

Our professors took great pride in their skill of physical examination.  Prior to ultrasound for the heart (echocardiography), physicians used their stethoscopes to diagnose heart murmurs from rheumatic fever, congenital heart defects, and acquired conditions such as heart attacks and high blood pressure. Now days, with ultrasound, CT and MRI scans, some physicians don’t even carry a stethoscope on their hospital rounds. Other docs move their stethoscope and hands over a patient while in conversation with a colleague, turning what was once ritual into perfunctory formality. Although amazingly useful, technology has allowed us to literally lose touch with our patients.

Dr. Robert Austrian, an esteemed elder among infectious disease specialists at the University of Pennsylvania, and a key researcher in the creation of the pneumonia vaccine, demonstrated the art of the pulmonary exam.  After taking a thorough history, Dr. Austrian put nearly his patients into trance as he methodically checked the position of the trachea, percussed the chest wall, asked them to repeatedly say “99” or “44” or “eee” and finally take deep breaths in and out, as he moved his stethoscope over the chest multiple times in order to find the subtle, asymmetric differences in sound that might signify pathology in one area of a lung.  When finished, he would straighten his back and pronounce his findings. We would then go to radiology to look at the chest x-ray, which he used more to verify rather than make the diagnosis. Finally, he would return to his appreciative patient to explain what he had found, whether any treatment was necessary, and answer any questions. I saw Dr. Austrian pick up on his exam a small, burned out tubercular cavity in the upper lobe of the left lung, as well as a 3-centimeter pleural-based tumor in the right mid-lung.  But it was ritual, as much as his expertise that connected him to his patients.

Some professors behaved as if the patient was simply an extra in a movie that they were the star. Students and residents encircled the patient while the attending grilled us for information, challenged us with questions, and taught us using technical medical terminology, while barely acknowledging that a human being lay in the bed. Then, he would simply nod to the patient and walk to the next bed. Later, one of us would need to return to the patient, who was at least confused and sometimes terrified. Fortunately, I also learned from equally skilled attendings, who demonstrated care and concern for the person behind “the gallbladder,” or “the pneumonia.”

Perhaps the best was Dr. John Loeb, an endocrinologist at Columbia, whose father Robert had been the brilliant, dedicated giant of medicine, esteemed researcher of adrenal and kidney metabolism, and, I was told, the feared archetype of a demanding, and sometimes humiliating, Bard Professor and Chairman of the Department of Medicine. I remember thinking that I was glad Dr. Robert had retired before I arrived, leaving behind only his renowned textbook of medicine for future students. I had concerns that his son, also considered an excellent physician, would impart his skills in a similar manner.

Ironically, I would not meet John Loeb at Columbia, but two years later during my residency at Penn for an exchange program in Shiraz, Iran, with Pahlavi University Medical School.  John came from New York City, and I from Philadelphia.  We needed translators to communicate with the Farsi-speaking patients. Fortunately, scientific disciplines at Pahlavi University were taught in English. I relied heavily on the medical students and residents to provide most of the histories and occasionally acting as interpreters. The patients, some from Shiraz itself, and many from surrounding nomadic tribes who had little formal education, did not expect to have a dialogue with the American doctor.  Occasionally, I would pursue more history and request that the resident ask another question. On my first day on the ward, I remember how dumbfounded and bemused the resident was when I asked if a 45 year-old tribal women with abdominal pain was still menstruating. When I pushed him to ask her, she looked as puzzled as he did with my question.  After a lengthy exchange, the resident proceeded to tell me that our patient was married at age 9 and became pregnant with her first child before she menstruated. She then nursed each of her fifteen children, which suppressed her cycle, and became pregnant again before ever having vaginal bleeding. She had never experienced a monthly cycle and entered menopause while nursing her youngest.  Introductions and interpretation took a lot of time, so mostly I accepted the histories from the well-educated and trained house staff.

Dr. Loeb arrived in Shiraz about two weeks after Anne, our infant son and me. In a few days, he began his rounds on the medicine ward.  We took him to the bedside of a very ill sixty year-old man with multiple medical issues.  I expected him to ask the medical student to give the traditional presentation of the case, which included pertinent history, physical findings, diagnostic tests, therapeutic interventions and response to treatment. Instead, Dr. Loeb placed his hand on the shoulder of his new patient, introduced himself, and asked for his permission to speak with and about him with the residents and students. He waited for the translation. The patient nodded his ascent and reached for the hand of this strange doctor.  John then took a couple minutes to re-arrange the patient’s position in bed, until he was sure that he was as comfortable as his condition allowed.  Only then did he move to the clinical issues at hand. Instead of asking for the student’s summary, he asked all of us what we noticed about the patient.  We spent about ten minutes describing all that was visible if we cared to look.  Before any words were uttered, Dr. Loeb already knew that the patient was in heart failure, likely due to leaking heart valves, had a thyroid goiter and was likely hypothyroid, and suffered from anemia, and chronic renal failure.  His exam confirmed most of these observations. Only then did he ask for the student’s summary, which confirmed the rest. Finally, Dr. Loeb returned to his new patient, explained our findings, treatment plan and likely prognosis, in simple language that, if correctly translated, he would understand. After the translation, John asked the patient how he was doing with all this medical information and if he had any questions or worries. His patient told him that he knew Allah would take him soon and that he was not afraid. He took John’s hand in both of his and thanked him for his care.

Dr. Loeb understood that nearly all patients lying flat in bed, and surrounded by white-coated experts hovering above them, felt vulnerable and scared, but often were too afraid of disappointing their saviors by wasting their precious time to tell them how scared they were.  His gentleness and sincerity created the space for the brief, intimate connection that was, in this case, the best medicine his very sick new patient would receive. Dr. Loeb taught me that clinical excellence and compassion are not mutually exclusive. In all the best ways, he was his father’s son.